Javascript must be enabled to continue! 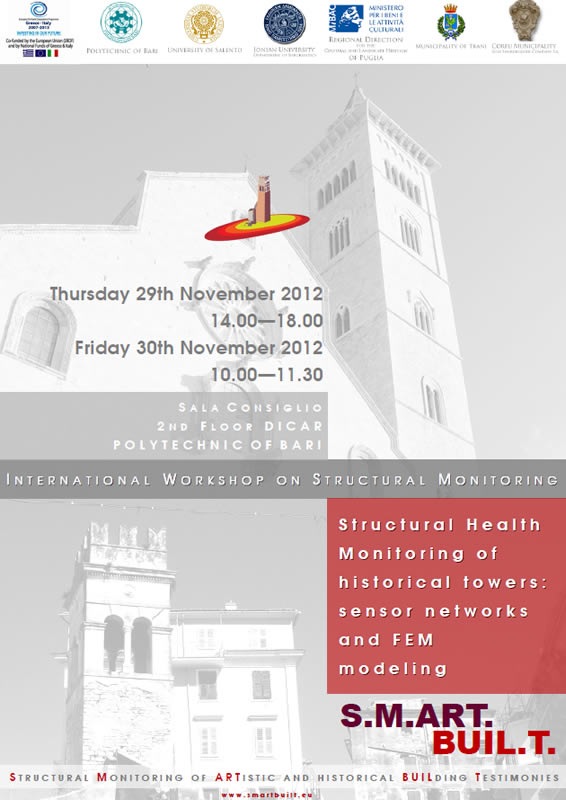 On November 30, 2012, the first Workshop of S.M.ART. BUIL.T. Project entitled “Structural Health Monitoring of Historical Towers: Sensor Network and FEM Modeling”, was held in Bari. Its main aim was to present the initial project results to a technical audience like engineers and architects interested in structural monitoring and historical buildings restoration. Project Partners presented some important outcomes of the work carried out from the beginning of the project. In particular: Dr. Spiros Vasiliadis, General Director of Corfu Municipality Sole Shareholder Company SA, made an intervention titled “Historical Public Buildings of Corfu”, to show five Public buildings of the historical Center of Corfù, with important historical, cultural and architectural values, and to highlight the importance of the SMART BUILT implementation for the preservation and the restoration of these kinds of buildings.

Dr. Tatiana Branca, expert of MIBAC, made an intervention titled: Seismic history and previous restorations of the two case studies of Trani, whose aim was to present the seismic history of Trani and to show the importance of restoration for earthquake resistant purpose, inter alia on the two case studies of the SMART BUILT Project. Particularly restoration interventions regarding the Castel of Trani (so its clock tower) and the Bell tower of the Cathedral (which in the Fifties was disassembled and
rebuilt with the use of its same blocks - anastylosis) were analyzed.

Dr. Maria Francesca Sabbà and Dr. Francesco Tucci, for the Technical University of Bari, presented, respectively, some preliminary results about the ambient vibrational monitoring of Annunziata tower in Corfu and the Cathedral bell tower in Trani”.